Hope you can join us at the Conversation Series at the Donald Danforth Plant Science Center this week. The topic is “Inside the Wells Fargo Innovation Incubator (IN2).”

The event is free but registration is required.

RNAissance Ag co-founder Bala Venkata will speak, along with Danforth PI Noah Fahlgren. RNAissance Ag was one of five companies selected for the IN2 ag cohort. 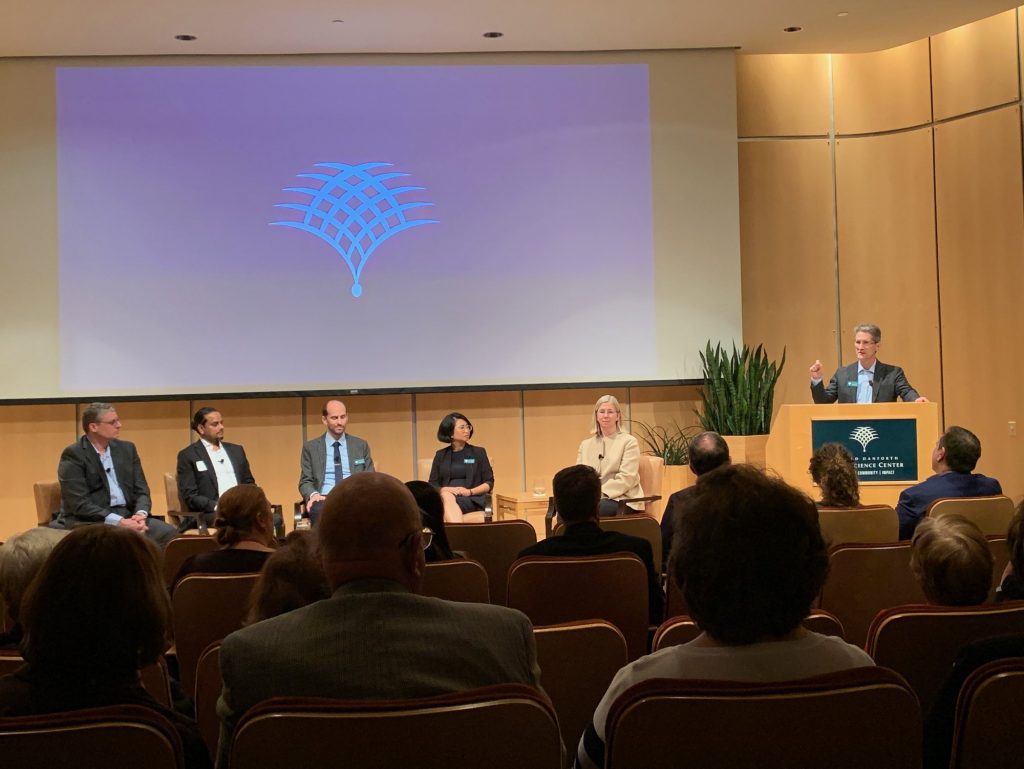 RNAissance Ag will participate in the 11th Annual Ag Innovation Showcase, which will be held Monday, Sept. 9 through Wednesday, Sept. 11, 2019, in Minneapolis, Minn.

One of only five agtech companies selected for the IN2 program, RNAissance Ag will receive up to $250,000 and technical support from the Donald Danforth Plant Science Center

KANSAS CITY, MO. — (May 14, 2019) — The Wells Fargo Innovation Incubator (IN2), a technology incubator and platform funded by the Wells Fargo Foundation and co-administered by the NationalRenewable Energy Laboratory (NREL), today announced that RNAissance Ag LLC has been selected as one of five companies nationally to participate in the incubator’s first agtech cohort – the program’s fifth cohort.

RNAissance Ag, a company formed by TechAccel and the Donald Danforth Plant Science Center, was selected for its innovations in developing technologies to produce food more sustainably. RNAissance Ag – pronounced “Renaissance” – is a biotechnology startup focused on delivering RNA-based insecticides for crop protection.

In selecting RNAissance Ag for the inaugural agtech cohort, IN2’s goal is to advance technologies that reduce agriculture’s carbon, energy and water impact, which collectively account for as much as 70 percent of water and 14 percent of energy usage worldwide. As a benefit of participation in the program, RNAissance Ag will receive up to $250,000 in non-dilutive funding to test and advance its technologies with experts at the Danforth Center, the world’s largest independent plant science institute.

“This is a terrific validation of our potential with this novel technology,” said Michael Helmstetter, Ph.D., President and Chief Executive Officer of TechAccel. “The IN2 support will help us advance the design for our first two insect pest targets and fuel us along the development pathway more rapidly.”

Launched in 2014 with an initial focus on supporting scalable solutions to improve energy efficiency in commercial buildings, IN2  expanded its focus in 2018 to advance innovations in agtech, or the application of software and hardware technology to farming. In launching this first agriculture cohort, IN2 seeks to help the agricultural sector overcome the substantial challenges, barriers and costs of implementing new technologies and to speed their paths to market.

“Wells Fargo is excited to be supporting and nurturing innovations that will ultimately lead to more sustainable and productive agriculture,” said Ramsay Huntley, Clean Technology and Innovation Philanthropy program officer for Wells Fargo. “As one of the largest lenders to the agriculture and agricultural technology sectors, Wells Fargo will bring its expertise to the table in de-risking these early-stage startups and help move them to the next level.”

Trish Cozart, IN2 program manager at NREL, noted that the companies involved with IN2 might be small companies, but they’re not solving small problems. “RNAissance Ag was an extremely strong applicant, and we cannot wait to see the strides they make by being a part of our program,”she said.

As an invitation-only program, IN2 finds and selects companies through its Channel Partners, a curated network of incubators, accelerators and universities across the U.S. that refer startups to the program. Once referred, companies participate in a highly competitive application and selection process to determine which will be invited into the next cohort of participants. For a complete list of IN2 portfolio companies, visit in2ecosystem.com.

“These five companies are driving innovation and new breakthroughs that will ultimately improve the way that we grow, make food, distribute and consume food and use resources,” said Sam Fiorello, chief operating officer at the Danforth Center. “We are proud to be a strategic partner helping to accelerate promising technologies that tackle these critical challenges.”

RNAissance Ag LLC was formed in January 2019 by the Donald Danforth Plant Science Center and TechAccel. The company holds the exclusive license to proprietary RNAi technology developed at the Danforth Center that has promise to be effective for insect pests that previously were considered resistant to RNAi. Visit www.RNAissanceAg.net for more information.

TechAccel LLC was founded in 2014 as a first-of-its-kind venture and technology development company in the agriculture, animal health and food tech sectors. TechAccel sources, invests in and acquires early-stage innovations. Through collaborations with universities and research institutions, TechAccel conducts advancement and de-risking research and development to ready technologies for commercialization. For more information, visit www.techaccel.netor follow @Tech_Accel.

About the Wells Fargo Innovation Incubator:

The Wells Fargo Innovation Incubator (IN2) is a $30 million technology incubator and platform funded by the Wells Fargo Foundation. Co-administered by and housed at the National Renewable Energy Laboratory (NREL) in Golden, Colorado, IN2’s mission is to speed the path to market for early-stage, clean-technology entrepreneurs. Launched in 2014 with an initial focus on supporting scalable solutions to reduce the energy impact of commercial buildings, IN2 expanded its focus in 2018 to advance technologies that address the interconnection of food, water and energy. Companies selected for participation in the program receive up to $250,000 in non-dilutive funding from Wells Fargo, technical support and validation from experts at NREL and the Donald Danforth Plant Science Center, and ongoing connections to organizations across value chains. For more information, visit in2ecosystem.com.

Founded in 1998, the Donald Danforth Plant Science Center is a nonprofit research institute with a mission to improve the human condition through plant science. Research, education and outreach aim to have impact at the nexus of food security and the environment, and position the St. Louis region as a world center for plant science. The Center’s work is funded through competitive grants from many sources, including the National Institutes of Health, U.S. Department of Energy, National Science Foundation, and the Bill & Melinda Gates Foundation, and through the support of individuals and corporations. For more information please visit, www.danforthcenter.org

“Over $40 billion per year is spent on pest control, yet over 20 percent of all crops are still lost due to insect damage,” said James C. Carrington, Ph.D., president of the Danforth Center. “This new company is evidence of an exciting new technology advancing toward market with the potential to make a major impact.”

“We are demonstrating the potential of RNAi technology to develop into a sustainable and environmentally friendly alternative to chemical pesticides,” said Michael Helmstetter, Ph.D., Founder, president and CEO of TechAccel. “An RNAi insect control measure is highly specific to the target insect and is not toxic to other organisms,” he said. “Further, we believe this approach can be more effectively applied than chemical sprays, reducing cost, waste and health risks to workers and the environment.”